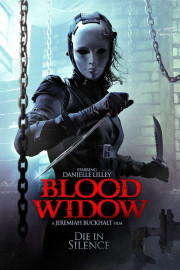 Laurie and Hugh are a successful young couple who have just closed on a weekend home away from the city. Unbeknownst to them, the neighboring property contains the crumbling remains of a boarding school that was shuttered in the wake of an unspeakable massacre. The sole survivor of that massacre still resides in the ruins of the school, hiding from the world and wanting only to be left alone. When Laurie and Hugh’s friends explore the property, they have no idea that they disturbed an emotionally-broken killing machine: The Blood Widow.